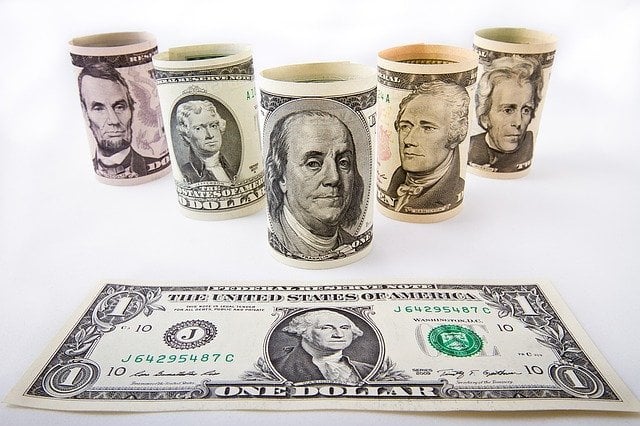 We recently had one of the worst, if not the worst, presidential debate in history.

What is meant to be a chess-match discussion concerning past and future policy quickly deteriorated into name-calling, posturing shouting match more akin to a WWE special.

While the childish nature of the first presidential debate was tough to watch, it is not the first time that presidential candidates have said something that would make you shake your head.

Believe it or not, presidential candidates, and presidents for that matter, regularly say things that are false, outrageous, and sometimes downright stupid regarding our free land.

Whether it is not understanding how finances work, or simply being out of touch with how the majority of American’s live, you will often find that politicians make poor economists.

Here are 15 quotes featuring the worst financial advice from the presidential candidate’s past and present.

Cleveland was a proponent of fiscal conservatism, which is a philosophy that calls for low taxes, reduced government spending, and minimal government debt.

While he made the federal government more efficient through the appointment of officials based on merit and not a party, economic downturns and a depression during his second term made him very unpopular by the time he left office.

Being as government officials are elected to serve the people, and are supported via taxes, Cleveland’s assertion that the government is not obligated to support its citizens seems off base.

“Blessed are the young, for they shall inherit the national debt.”

The implication is that the current generational leaders do not need to worry about their decisions because it will be the burden of future generations to deal with the consequences.

This is the idea of kicking the can down the road.

While there are certainly times where the government needs to act, such as the Great Depression that began during Hoover’s presidency, it is always important to consider the consequences and to at least think about ways to rectify the issue down the line.

“It’s true hard work never killed anybody, but I figure, why take the chance?”

“I am not worried about the deficit. It is big enough to take care of itself.”

Reaganomics has had a huge impact on the economic and financial policies of our nation and continues to perpetuate the idea that benefiting the wealthy will somehow trickle down through the classes and benefit everyone.

Whatever your thoughts on the idea of trickle-down economics, these two quotes are pretty absurd.

I really hope Reagan was joking when he said these.

“We could give it all back to you and hope you spend it right.”

This quote may be confusing on the surface but given some context, this statement made by Bill Clinton in 1999 will likely leave most fuming.

Speaking to a crowd in Buffalo about a surplus, Clinton argued against returning the surplus to general tax relief because he did not think people would spend it wisely. Instead, Clinton proposed the government investing that money to bolster Social Security.

This policy would have meant the government would own shares in American corporations through taxpayer dollars, a problematic notion in and of itself. It would also mean American’s would become more reliant on an often-inefficient government to invest for their retirement since clearly American’s are not capable of doing it themselves.

Plus, it is your money, you should be free to spend it how you want whether or not you make the “optimal” decision.

“A dog’s healthcare costs less than my mother-in-law’s!”

Al Gore first served as Vice President under Bill Clinton and then was defeated in a run for president against George W. Bush in 2000.

This quote came as he was trying to give a personal example of the high cost of healthcare and prescription medication, but this comparison ended up being kind of silly.

Healthcare costs for humans and animals can be quite expensive, but in general medication and medical procedures for animals will not force you into crippling debt as human medical bills can. In fact, a 2019 study found that roughly 137.1 million American adults reported medical financial hardship within the previous year.

“It’s clearly a budget. It’s got lots of numbers in it.”

“You work three jobs? Uniquely American, isn’t it? I mean, that is fantastic that you’re doing that.”

Former President George W. Bush also comes in twice on this list and was known for frequent gaffes, often referred to as “Bushisms.”

In fact, he misspoke so often that some have speculated that he may have had a learning disability such as dyslexia. Although this was denied by Bush, he also confirmed that he had never been assessed for dyslexia.

Either way, Bush clearly was out of touch on a number of financial topics, including the need to work multiple jobs to pay your bills.

Yes, the need for people to work multiple jobs to survive is uniquely American, and that is not a good thing.

“The issue of economics is not something I’ve understood as well as I should. I’ve got Greenspan’s book.”

Vietnam prisoner of war survivor and hero John McCain had a long and distinguished political career but was defeated in his bid for president by Barack Obama in 2008.

What is ironic with this quote is that McCain was attempting to be honest by admitting that he did not understand economics well and was trying to improve. However, a presidential candidate admitting he isn’t up to snuff in economics isn’t likely to give people a lot of confidence.

By the way, Alan Greenspan has several great books about capitalism and other economics topics that you can check out if you’re interested in brushing up on your economics.

“If you’ve got a business, you didn’t build that. Somebody else made that happen.”

Okay, this one seems pretty bad on the surface but taken within the larger context and you can begin to see the big picture.

While everyone who has succeeded in this country has likely had help in some form, it is very simplistic to distill that success down to government-funded programs.

“If we simply refuse to extend the budget by one penny for three to four years, you got a balanced budget. Just like that.”

Yeah, I don’t think that’s how it works, Ben.

Presidential candidate Dr. Ben Carson was strongly against deficit spending and proposed stopping all spending. He also proposed not replacing retirees in government positions and department budget cuts to eradicate the national debt.

While the national debt situation is a problem, working staff members into the ground and refusing to spend money on needed programs is probably not the best way to go about it.

“My aspiration for the country and I believe we can achieve it, is 4 percent growth as far as the eye can see. Which means we have to be a lot more productive, workforce participation has to rise from its all-time modern lows. It means that people need to work longer hours.”

Economic growth is a good thing, and 2016 presidential hopeful Jeb Bush had us up until the part where he proposed that this growth should come courtesy of American’s working more than they already are.

The 8-hour workday was a hard-fought standard that came as a result of reforms to the unhealthy work schedules of the 1800s. Being as the average American is already working 8.8 hours a day, Bush’s plan to put economic growth further on the backs of American workers was not well-received.

“We came out of the White House not only dead broke, but in debt. We had no money when we got there and we struggled to, you know, piece together the resources for mortgages for houses, for Chelsea’s education, you know, it was not easy.”

Hillary Clinton made history for being the first woman to win the presidential nomination from a major party but was not elected despite multiple runs.

Despite this momentous achievement, Hillary Clinton often dealt with the perception that she wasn’t genuinely warm or charismatic, and many simply did not like her. Unfortunately for her, quotes like the one above did nothing to help her image.

What Clinton is referring to as “not easy” was remedied by her and former President Bill Clinton giving speeches.

Speeches that brought in $5 million and $100 million, give or take.

“My net worth fluctuates, and it goes up and down with the markets and with attitudes and with feelings, even my own feelings, but I try.”

While President Bush and current presidential candidate Joe Biden are known for their gaffes, President Donald Trump is a bad quote machine.

It seems like nearly every day there is something new and outrageous suggested in a speech, address, debate, or tweet by President Trump, but in terms of financial advice this one Trumps them all.

And, just in case you were wondering, the answer is no. No, you cannot increase your net worth simply with feelings.

However, President Trump may be onto something with the markets because they do tend to respond to many of his outlandish statements, like when the market fell after he recently called off stimulus negotiations.

Presidential hopeful Joe Biden has some solid ideas for our country, but don’t count on him for financial advice.

As a career politician and former Vice President, Biden enjoyed many years with a six-figure salary and now receives a six-figure pension. Combine that with a lucrative book deal and he is set for life.

The average American, however, cannot rely on such lucrative retirement income unless they save it themselves.

In other words, save and invest as much as you can, as often as you can. 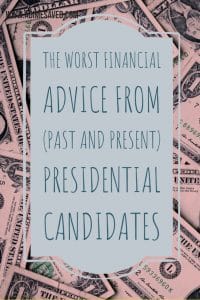 Everyone says stupid things on occasion, and many people give bad financial advice. But, when you are the President of the United States or trying to become one, your every move and word is under the highest scrutiny.

It is unrealistic to expect one person to be an expert in everything, but financial advice is something I would not take from presidents or presidential candidates.

Whether they are simply out of touch with the average citizen or lacking in an understanding of basic financial and economic matters, it is important to remember that presidential candidates are not financial advisors.

Tawnya is a 34-year-old Special Education teacher in the sixth year of my career. Along with her partner, Sebastian, she runs the blog Money Saved is Money Earned. Tawnya has worked extremely hard to reach my goals and remain debt-free. She holds an Honors BS in Psychology from Oregon State University and an MS in Special Education from Portland State University and has had a pretty successful writing career, first as a writing tutor at the Oregon State University Writing Center, and in recent years, as a freelance writer. Tawnya and Sebastian have a wealth of knowledge and information about personal finance, retirement, student loans, credit cards, and many other financial topics. It is this wealth of tips and tricks that they wish to pass on to others.