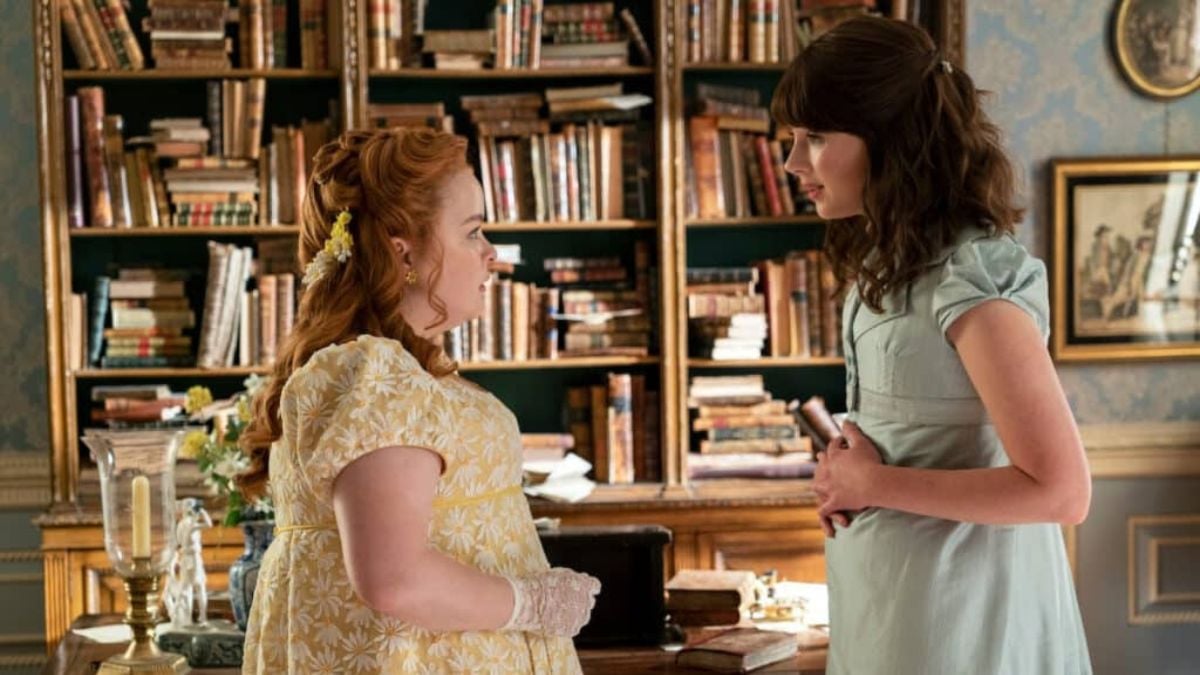 Once again I, Lady Whistledown have returned in the wake of a new season of Bridgerton. This latest foray into life among the ton has given this author much to consider, indeed…

In a surprise to no one, the second season of Bridgerton was possibly even more highly anticipated than the first. Within days of its release, it became the number one English language series on Netflix. It’s easy to see why. Pre-existing anticipation coupled with absolutely electric chemistry between Anthony Bridgerton (Jonathan Bailey) and Kate Sharma (Simone Ashley) that appealed to the enemies-to-lovers demographic, to the ones who love to watch characters pine for each other, yearn for one another all while knowing the object of their desires (and the bane of their existence) remains painfully just out of reach.

The greatest strength of the season ultimately led to its greatest flaw, which was that in dragging out the pining for so long it became stressful and frustrating for many. Those who hadn’t read The Viscount Who Loved Me on which season two was based were screaming “just kiss already” to the screen, while those who had read it were likely stunned at the hard left turn the season took at the midpoint.

But the differences in adaptation are a conversation for another time. With the second season behind us now, and viewers more invested than ever in the prolific Bridgerton family and all their paramours, we turn our eye now to the future of the series. It has already been renewed for an additional two seasons at Netflix, and the question of how the seasons will play out is now more of a mystery than ever.

And so, dear reader, it is time once again to formulate thoughts and hopes on what future seasons of Bridgerton shall bring. And though it is not in this author’s nature to print retractions, a couple of them shall be found sprinkled in throughout as I reassess my opinions from my Season 2 wishlist.

First Suggestion: Stick Closer to the Heart of the Books

In my hopes for Season 2 and beyond, I had initially suggested combining Anthony and Benedict’s (Luke Thompson) books into a single season. Just what I was thinking I cannot begin to say. It was likely a comment born out of fear that the later books would never get adapted onscreen, and the uncertainty of the show continuing beyond a second season.

But now, in the knowledge of having two more seasons and in the wake of the second season taking many adaptational liberties, I want to walk back that hope and instead say this: I hope that Season 3, likely based on Benedict’s book An Offer From a Gentleman sticks closer to the heart of the story, and to what makes Benedict and Sophie work as a couple, rather than padding out their romance with interference from every side character imaginable.

Yes, An Offer From a Gentleman is a fairly direct Cinderella retelling. It’s a formula audiences are very familiar with. But after two seasons of Benedict questioning his place in society, his family, and his overall value as an individual and an artist, it’s a natural progression of his story for him to also call into question his capacity as a partner and a husband would be as well.

In this way, he and Sophie are well matched. Her background leaves little factual doubt about her origins, but the space she occupies in society is a liminal one. She is neither a lady nor a servant, yet she doesn’t fit comfortably within either label that society is keen to assign to force her into.

So when I say my hope is that Season 3 focuses on the heart of the story, this is what I mean. Lean into Benedict and Sophie’s similarities, and how they both feel out of place in every sphere they inhabit. Let them strive to overcome those questions and insecurities to be together. The only external force I want to see trying to keep them apart is the nebulous concept of society and its expectations.

While I’m here, if we’re continuing this diverse casting approach, small petition to make Sophie Persian. Persia was a thing back then! It’s entirely possible!

Second Suggestion: Include Anthony and Kate in the Intrigue

Simone Ashley recently confirmed that she and Jonathan Bailey would be returning for the third season and “Kanthony” fans were overjoyed at the news. The second season saw Season 1 lead Daphne (Phoebe Dynevor) return in a supporting capacity to offer insight to her eldest brother — and valiantly try to steer the plot back on track with the book.

It’s easy to imagine Anthony and Kate filling this role in the next season. Indeed, the writers would be remiss not to capitalize on the tremendous popularity of their characters, whose chemistry was truly the saving grace in an unevenly paced season. Bridgerton has never been reluctant to focus on characters outside of the main couple for the season, and it’s my hope that Anthony and Kate are given a subplot of their own to allow viewers into their lives post-happy ever after.

The easiest way to do this, in my view, is to have them assume the role Violet played in An Offer From a Gentleman. In an effort to keep Sophie close, Benedict takes her to London and gets her a post as a lady’s maid to his sisters. It is via this plot point that Violet comes to realize how much Benedict cares for her, and how Benedict realizes Sophie is the mystery woman he met at a masked ball all those years ago, so its a fairly crucial one to maintain if they are keeping Sophie’s story the same.

With Anthony and Benedict as close as they are, and Kate being as perceptive as she is, having Sophie work in Anthony and Kate’s home will allow our Season 2 couple to draw their own conclusions about what Benedict truly wants, and help the sweet and charming Benedict and Sophie find their way to each other.

I cannot believe I’m saying this again, but the writers do remember Penelope (Nicola Coughlan) is meant to be one of the romantic leads on this show, right?

I understand that as far as television goes there isn’t a ton of slow-burn dramatic and romantic potential in having Penelope just kind of sit there for three seasons and then for Colin (Luke Newton) to suddenly realize that she’s been there all along and maybe he really was in love with her the whole time.

But two seasons in, Penelope continues to get done dirty by the writers. The first season saw her outing Marina Thompson’s (Ruby Barker) pregnancy, and therefore her scheme to marry Colin before it became noticeable. The second season then had her throw Eloise (Claudia Jesse) under the proverbial societal bus in order to protect her from a false accusation of being Lady Whistledown.

Bringing her low in order to build her back up in her own season is one thing, but how many people close to her does she have to hurt? Not to mention both of the women hurt by the column are women Colin — Penelope’s future husband — cares about a great deal. At what point are we stretching his capacity for forgiveness to its limits?

I don’t think she’s so far gone that a romance between her and Colin feels unrealistic. But I do think that in order for her to take the lead in Season 4, then Season 3 needs to see Penelope’s redemption already in progress. Do not leave it for the fourth season when audiences will have to contend with both that and with her and Colin’s blossoming romance. All that will do is make the season feel overstuffed and rushed, presuming the other characters continue to get their share of screentime.

The one assessment I absolutely will not change from last year’s wishlist is this: there is absolutely no way Eloise’s book To Sir Philip, With Love can be kept as it is without losing half the audience, and then some.

As a refresher, the plot of the book revolves around Eloise writing to and then eventually sneaking off to visit Sir Philip Crane (Chris Fulton), the husband of the late Marina Thompson (who is a Bridgerton cousin in the books). Marina’s death comes at the end of years of depression when she attempts to drown herself, and though the attempt is stopped by Sir Philip, she quickly falls ill and dies.

It’s clear from Marina’s appearance in Season 2 that she isn’t happy but rather resigned and determined to make a go of it. While I know that her mental state can obviously deteriorate in the intervening years, I cannot overstate what a colossal mistake it would be on the part of the showrunners to have their lone, young Black character take her own life as a means to further someone else’s story.

If they are indeed determined to have Eloise end up with Sir Philip — a prospect that becomes more intriguing the more I think about it because Show Eloise would absolutely eat that man alive and he wouldn’t know what hit him — then in my view the best way to achieve this is to have Marina simply leave him to forge a life elsewhere. A little out of nowhere perhaps, but certainly preferable to the alternative.

I do want to take this moment to mention that since Season 1, Sir Philip has grown on me. Granted, he wasn’t in much of the first season, but his appearance this time around painted the picture of an awkward, too serious but not unkind man and I really hope we get to see more of him in future seasons.

Where is Francesca (Ruby Stokes)? Seriously. Season 1 had her off with an aunt in Bath practicing her piano. Season 2 had her present with her siblings until they all departed Aubrey Hall…and presumably left her behind.

Her actress Ruby Stokes was busy filming another project while Bridgerton shot its second season, so her absence was understandable, but it is now currently reaching the point where she needs to be around and more involved if the show hopes to centre a whole season around her later.

In fairness, I’m not sure Julia Quinn much knew what to do with Francesca either. She is mentioned in the background of the early books until suddenly one day its mentioned that she married and is living with her husband on his estate in Scotland. It isn’t until her story — where she is widowed and wants to find love again — that there is any real attention paid to her. But enough threads have been set up for books 3-5 in the first two seasons that it’s high time Francesca’s book got a little foreshadowing as well.

With Eloise and Penelope now on the outs — though I imagine this isn’t forever — perhaps now is the time for the two middle Bridgerton sisters to form a closer bond? They might be extremely different in their wants and temperaments, but that feels like the most natural way to make Francesca a part of the action. What better way to introduce her first husband John than via a society event? Give the audience a chance to fall in love before having our hearts ripped out!

There you have it, dear reader. This author’s hopes and dreams for the future of Bridgerton are many. But what can one do while awaiting the continuation of the story? Consider perhaps trying the novels on which the series is based? Or perhaps, if you’ve already done so, other novels by Bridgerton author Julia Quinn, or others in the romance genre? Whatever you choose to do, know that I will be around eagerly awaiting Season 3!

More From Wealth of Geeks

This post was produced and syndicated by Wealth of Geeks.